Abstract:
ITF282, a soluble iron succinyl-protein complex orally administered to the rat elevates the concentration of iron in the serum to a greater extent than ferritin. The serum iron increase induced by ITF282 is delayed when compared with ferrous sulphate. The ITF282 absorption process, like that of ferritin, proceeds along the physiological pathways without bypassing the transfer system of the intestinal mucosal cells since no further increase of serum metal is observed when giving high doses of ITF282 to the rat pretreated with a saturating dose of ferrous sulphate.

Hypochromic and microcytic anemia induced in growing rats by bleeding and feeding a low iron diet is sensitive to both prophylactic and therapeutic oral treatment with ITF282. Iron deficiency anemia and cardiomegaly induced in suckling rats by feeding the pregnant and lactating dams with the low iron diet are reversed by oral treatment of the dams with ITF282. Comparative investigations of the therapeutic efficacy of ITF282 and ferritin made on uncomplicated iron deficiency anemia show that the drugs, p.o. administered during 4 weeks are equally effective.

Preliminary toxicological data in the rat, after single and chronic administrations, show that ITF282 is well tolerated. These findings prove that ITF282 gives an adequate supply of iron from which to make hemoglobin. 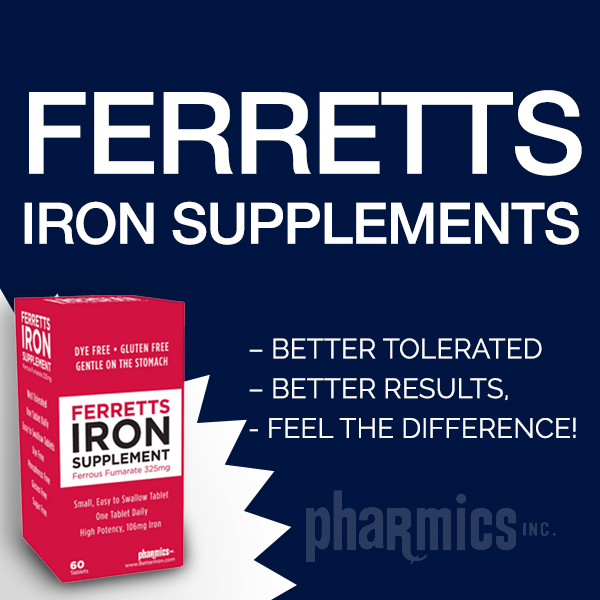 Abstract:
In this brief review the preclinical safety studies on iron protein succinylate (synonym: ITF282) are presented. Iron protein succinylate is an iron-protein complex, in which iron is present in ferric form. It has been developed for oral iron-supplementation therapy and is characterized by a very favorable tolerability profile. The acute toxicity of iron protein succinylate to rodents is very low, indicating a substantial margin of safety with respect to accidental child poisonings. In chronic toxicity studies of 52-week duration in rats and dogs, there were no findings of toxicological significance. In particular, there were no alterations in hematological parameters and no histopatholgical findings consistent with iron overload damage. Some deposition of iron was noted in the spleen and liver of the treated dogs. A series of reproductive toxicology studies were performed to assess the effects on fertility (in the rat), peri- and postnatal reproductive function (in the rat) and fetal toxicity (in the rant and the rabbit). Treatment with iron protein succinylate did not result in any adverse effect on reproductive performance nor did it affect the incidences of malformations, visceral and skeletal anomalies or skeletal variants. There was no evidence of mutagenic activity in a comprehensive series of in vitro and in vivo mutagenicity studies. No secondary pharmacological effects of the product were noted in a wide range of single and repeated administration studies. Overall, the available toxicology and safety profile of this product offers ample assurances of the safety of iron protein succinylate in clinical use.
Arzneimittel-Forschung/Drug Research 45 (II), 11, 1211-1216 (1995)

Meta-analysis of Efficacy and Tolerability Data on Iron Protein Succinylate in Patients with Iron Deficiency Anemia of Different Severity.

Abstract:
Iron protein succinylate (ITF 282, CAS 93615-44-2) is an iron derivative for the oral treatment of iron deficiency anemia. Its efficacy and tolerability have been proved in about 1800 patients, enrolled in 3 multicenter clinical trials.

The 3 studies show homogeneous Hb increases. ITF282 appeared to provide, from time 0 to the 30th day of the treatment, a similar or lesser increase in Hb in comparison to the reference drugs, while from the 30th day to the 60th day its efficacy was always greater than that of the reference medications.

The time course of Hb increases and the tolerability data suggest a different mechanism by which ITF282 and the reference drugs are effective. Since the main difference between ITF282 and the reference drugs is the form in which the iron is presented to the gastrointestinal mucosa, it may be supposed that the reface drugs, providing free divalent iron ions for absorption, could induce some kind of irritative condition of the gastrointestinal mucosa, which results in a reduced longterm absorption capacity, as well as in a higher indicence of gastro enteric adverse events.

Cremonesi P. and Caramazza I.

Abstract:
ITF282 is an iron succinylate casein complex containing 5% iron. The main property of the derivative is to keep iron bonded at acidic pH values. This accounts for a better tolerability of the compound compared with iron salts, during the treatment of iron deficiency. Pharmacological studies in normal and anemic rats demonstrated that this iron complex is almost as active as ferrous sulphate against iron deficiency anemia, but it is significantly less potent in increasing serum iron, better gastrointestinal tolerability of ITF 282 was demonstrated in rats and dogs. Chemical and pharmacological properties of iron-protein succinylate are described.